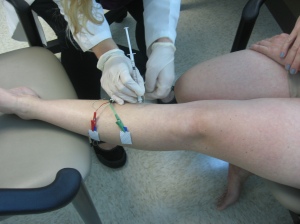 I have spent years being appalled by the idea someone would choose to have themselves injected with toxins.  Ironically, I made a choice to do just that last week.  In light of continuing research with positive results in stroke patients and suggestions from doctors, it was my turn to be injected.  I had two shots of Botox put into my lower left leg this past week.  One shot went into the posterior tibialis muscle.  The other entered my flexor digitorum longus.

I received these shots from a neurologist at Loma Linda hospital in Murrieta, California.  That morning was filled with negative anticipation.  I had a lot of fear.  I feared more damage would be done to the stroke affected leg.  I had fear the muscle would become too weak, and I would not be able to walk out of the office independently.  I feared my hyperreflexia, overactive and overresponsive reflexes, would cause me to kick my leg up and dislodge the needle from the doctor’s hand.  I had fear the shot would not work as quickly as it had on previous stroke survivors.  Most of all, I had fear I would not notice any difference whatsoever.  Thankfully, within twenty-four hours after the shot I was able to note I had nothing to fear.

In my medical challenges, I have gained an immense amount of knowledge.  Like so many other individuals, life experiences have taught more and given me a deeper understanding than any school course I have ever taken.  For example, if I had ever heard someone say “we need to watch your tone”, I would have thought they were implying I was speaking rudely.  I now know they are referring to my spasticity.  I understand this is when my leg muscle, for me the posterior tibialis, is constantly contracting.  This is why my leg is often cramped.  I have trouble walking in the morning when I get out of bed.  This is why I have nearly fallen over every morning for seven and a half years as I take my first few steps.  I never before understood the flexor digitorum longus was a specific muscle near the back of my leg, nor did I know this muscle overworking was to blame for my toes constantly curling.  This caused difficulty walking in anything other than bare feet or tennis shoes.

My most recent lesson in stroke recovery was that Botox can allow these uncomfortable, sometimes painful, irritations to disappear at least temporarily!  I had hope for relief, but I never allowed myself to dream of how quick and how complete this relief would be.  The following morning after the shot I took one step.  I took a second step.  I waited and grabbed on to my dresser. I took a timid third step.  Nothing!  I let go and moved my leg around.  I could not believe it.  I walked down the hall and up again.  Down once more and again back to my room.  No pain or stiffness at all.  Not for seven and a half years had I been able to get out of bed and not experience a need to brace myself.  Later that day I put on a pair of dress shoes and did not feel discomfort when I began to walk.  I had feared a lot when I went in for that shot twenty-four hours before.  Maybe one thing I feared most was the unspoken fear to hope for amazing results.  It was these amazing results I woke with the next morning.

I never quite understood why someone would want to alter their appearance through an injection that had the potential to kill in a large dosage.  I have the mindset wrinkles are earned and a story is told by those lines upon our face.  An old proverb states, “Age may wrinkle the face, but lack of enthusiasm wrinkles the soul”.  I do not understand why someone would diminish that beauty with an injection of Botox.  In truth, I may never understand this elective surgery.  I did find though that something changed rapidly with my own choice for Botox.  The pain was gone with new morning’s light.  The simple tasks I could barely allow myself to hope for after eight years were now mine without effort.  No, I do not want my face altered or my aging process slowed; however, I am very grateful for the beauty pain free mornings have offered.  Botox has greatly improved my stroke recovery.  To me, that is beauty.

Perfect Haircut for Any Season

Thanks for taking time to share your thoughts Cancel reply